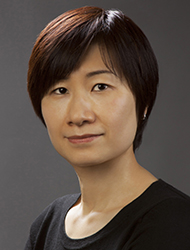 Noriko J. Horiguchi (Ph.D., University of Pennsylvania, 2003) is an Associate Professor of Modern Japanese Literature at the University of Tennessee. Her research interests include postcolonial studies, gender studies, and cultural studies.

Her first monograph, Women Adrift: The Literature of Japan's Imperial Body (University of Minnesota Press, 2011), analyzes how women figured in the expansion of the national body of the empire.

Currently, Horiguchi is preparing her second book manuscript, on food narratives and memories in modern Japan. Part of her argument on this topic can be read in “The Devouring Empire: Food and Memory in Hayashi Fumiko’s Wartime Narratives and Naruse Mikio’s Films,” in Devouring Japan: Global Perspectives on Japanese Culinary Identity, ed. Nancy K. Stalker (Oxford University Press, 2018).

In 2015, Horiguchi's teaching was profiled in The Daily Beacon, the UT student newspaper.

In 2019, Horiguchi gave a radio interview on the connection among Japanese culture, economy, and politics in Tennessee on the occasion of Consul General of Japan Hiroyuki Kobayashi's visit to UT.

The flagship campus of the University of Tennessee System and partner in the Tennessee Transfer Pathway.