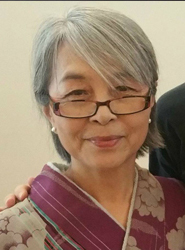 Mahagi LaCure grew up in Japan and moved to the United States in 1975.  She worked as a weaver and sold her tapestries at various galleries.  After obtaining a Master of Education in foreign language education from the University of Tennessee, she started to teach Japanese at the university.  She has been teaching for almost 25 years.  Also she has been the faculty advisor for the Vol’s Japanese Cultural Association since its inception.

She is actively involved in introducing Japanese culture to the Knoxville and the surrounding community, including playing the shamisen, a Japanese three-string instrument.   She is a strong supporter of the Asian Festival in promoting and celebrating cultural diversity in Knoxville.

The flagship campus of the University of Tennessee System and partner in the Tennessee Transfer Pathway.